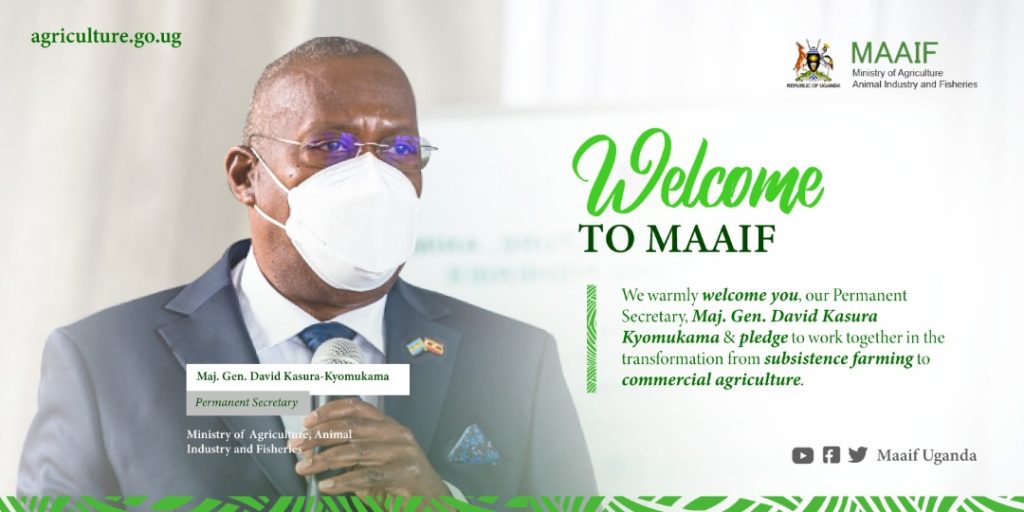 Maj Gen. David Kasura Kyomukama is the new Permanent Secretary of the Ministry of Agriculture, Animal Industry and Fisheries. He joins the ministry with over 30 years of leadership experience.

Before joining the Ministry of Agriculture, Maj. Gen. Kasura-Kyomukama was the Director of the National Leadership Institute at Kyankwanzi, and before this he was the Defense Liaison Officer for Uganda at the East African Community Secretariat in Arusha. Prior to working in Arusha, Maj Gen Kasura had worked in the National Resistance Army and its successor the Uganda Peoples Defense Forces in various capacities, including Commander and Staff Officer in diverse capacities. He has also worked in the Office of the President.

Maj. Gen. Kasura-Kyomukama has taken part in the setting up and reorganization of a number of structures. He was a pioneer leader of, and helped in setting up the Internal Security Organization (ISO) in the Office of the President; as well as the Chieftaincy of Pensions, Gratuity, Survivor Benefits and Compensation in the Uganda Peoples Defense Forces (UPDF). He took part, as Director, in the reorganization of the structure and operations of the National Leadership Institute (NALI) at Kyankwanzi; and was also part of the team, under the Late Lt Gen Pecos Kutesa, that wrote the Uganda Defense Doctrine as well as the Structure and Establishment of the UPDF.

Maj. Gen. Kasura-Kyomukama has a Bachelor of Science Degree from Makerere University Kampala, and a Masters’ Degree from Salford University in Manchester. He has also attended a number of leadership courses (military and civilian) in Cuba, Russia, China and the United Kingdom.

Maj. Gen. Kasura-Kyomukama’s focus will be geared towards the transformation of the Agriculture sector in order to stimulate and drive the agenda of socioeconomic transformation in Uganda.  One of the tools will be the Parish Model so that this transformation is carried out by the people, and occurs among them based on their needs and aspirations.

“Despite the critical importance of the agricultural sector, it faces various challenges. These include low productivity while employing large numbers; low market competitiveness of our products; and the dependence on the vagaries of nature for production,” Maj. Gen Kasura-Kyomukama averred. He emphasized that he will try to solve these and other challenges by utilizing a collaborative whole of government approach in order to leverage the power that working as a team stimulates.