The project will be implemented in the mainland areas located in a narrow belt (25-30 km) along Lake Victoria and surrounding the two island districts of Kalangala and Buvuma, but also areas in the western (Bundibugyo, Masindi) and north-western (Arua) parts of the country.

The Project will work in geographical hubs, where a hub is defined as “an agro- climatically suitable area (not an administrative district), within a radius of 30 km around a planned or actual CPO mill, and in which a minimum of 3,000 ha of OP production can be assured.”

It is this radial area that marks the limits of financial viability for the producers, who may be smallholders only or, in the case of Buvuma and Kalangala, smallholders plus nucleus estate.

Drawing on this model, NOPP will concentrate its activities on smallholder Oil Palm development on the following hubs:

Project investment in any of these, or other hubs, will be dependent on confirmation of the agro-ecological suitability of the area, the identification of smallholder producers with 3,000 ha to dedicate to Oil Palm production within the 30km radius; and a firm commitment by the private sector to invest in the CPO mill to serve the local supply.

The first target group are the prospective smallholder OP producers in the four new hubs, who may currently be practicing subsistence cropping and/or fishing, having up to 2ha of land suitable for oil palm development. These households will benefit from Project support with development financing to enable them to establish up to 2 ha of oil palm while keeping some land for food crops. 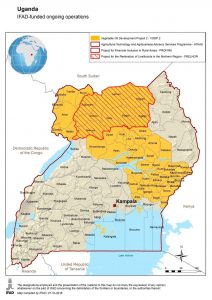 In Mayuge, Masaka/Rakai and Hub 4 a minority of these households will have more than 2 ha to dedicate to OP production (an assumed 20% of households, with an average of 4 ha additional land, beyond the 2 ha): this group will be supported with NOPP financing up to the 2 ha threshold; beyond this area, they will be expected to either access commercial financing or draw on their own resources to meet the establishment costs.

The Project will link these producers to financial institutions and provide them with technical support services. In Kalangala, the Project will support those smallholders already growing oil palm, to increase the productivity of their existing plantations; but it will not support an expansion in the area under production.

A second target group will be poor families in targeted communities where oil palm investment will take place, who will be assisted to respond to the increased economic opportunities in a dynamic local economy. Smallholder OP growers will also be targeted by this intervention to diversify their incomes and strengthen their food security.

Specific targets will be set to reach out to women and youth (at least 50%), and gender sensitive approaches will be used in all stages of the Project. Overall, the alternative socio-economic activities will allow to more than double the number of beneficiaries and to deepen sustainable livelihood development in the OP-growing communities. 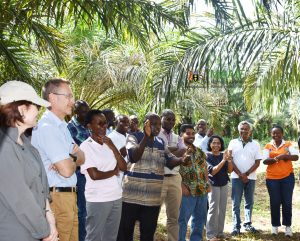 Poor and vulnerable households will be directly targeted by NOPP investments in oil palm production (Component 1) and in alternative economic opportunities and mitigation of social risks (Component 2). Overall, an estimated 30,800 households will directly benefit from these NOPP activities, without considering the sensitization activities aimed at whole communities.

On the basis of an average household size of 5, these figures translate to 154,000 individuals.

Of these, over 11,000 households will benefit as smallholder OP growers; and a total of 23,700 households are expected to benefit from the Alternative Economic Livelihoods activities, out of which 19,300 will be additional, non- OP growing households.

A total of almost 8,100 households will benefit from the mitigation of social risk (household mentoring) activities: these will include not only OP growers and non-OP growers, but also an estimated 475workers in the nucleus estates (of Kalangala and Buvuma).

Beyond the direct target group many more people are expected to benefit indirectly as a result of the employment opportunities created by the smallholder OP growers and the nucleus estate in Buvuma.

Finally, the communities within the targeted area for smallholder oil palm development will indirectly benefit from the broader spill-over economic and social benefits resulting from Project interventions targeting the communities in which OP growers live, together with the improvements in infrastructure and social services that will accompany the core oil palm investment. As the spill over effect of oil palm increases, socio-economic activities and services will further develop.

National Oil Palm Project Uganda
Learn More
NUFLIP PHASE 1
Learn More
The UMFSNP project
The Uganda Multi-sectoral Food Security and Nutrition Project (UMFSNP) is implemented, over a period of five years, by the Government of Uganda (GoU) through the Ministry of Agriculture, Animal Industry, and Fisheries (MAAIF) working in a multi-sectoral collaboration with the Ministry of Health (MoH) and the Ministry of Education, Science Technology and Sports (MoESTS)
Learn More
Banana Livelihood Diversification project
This project helps to support vulnerable communities in Western Uganda to better adapt to the effects of climate change (CC)  through banana value addition activities, to provide greater opportunities for income generation, poverty reduction and food security
Learn More
Uganda-China Cooperation
The Government of the Republic of Uganda and the Government of the People’s Republic of China have had a cordial relationship for a long time. China has made significant contributions to Uganda’s Agricultural sector development including provision of project aid to Uganda in form of interest-free loans and grants. Notable ones include the Kibimba and Doho rice schemes, Wakawaka Fish landing site, Kajjansi Aquaculture Training Centre, Hydropower Stations and Road Construction. Trade has included leather, coffee, fish and food products among others.
Learn More
The ACDP project
The Ministry of Agriculture, Animal Industry and Fisheries (MAAIF), with support from the World Bank is implementing the Agriculture Cluster Development Project (ACDP). The project arose from the need to implement the Ministry’s comprehensive plan to operationalize the Agriculture Sector Development Strategy and Investment Plan 2011/12 – 2014/15 (now Agriculture Sector Strategic Plan 2015/16 – 2019/20) and in line with the Uganda National Development Plan.
Learn More
The VODP2
Uganda imports 60-70% of its edible and soap needs; Population growth and rising incomes continue to fuel an annual growth rate of 9% in domestic and regional demand for vegetable oil and its by-products. VODP 2 is Uganda’s strategic effort and increase domestic vegetable oil production, address rural poverty by involving smallholder farmers in oil crops production and improve the health of the population through increased vegetable oil intake.
Learn More
The ENRP project
The project is expected to increase production and productivity, mainly of small holder rice farmers, by focusing on those factors that currently limit production which include;
Learn More
The ATAAS project
In 2010, the ATAAS project was developed as an investment in maintaining and raising the level of farmer productivity and household income through the development and adoption of modern farming technologies, techniques and strengthening market linkages. The project had key activities along the research-extension-farmer-market value chain continuum under five components: (1) Developing Agricultural Technologies and Strengthening the National Agricultural Research System (NARS); (2) Enhancing Partnerships between Agricultural Research, Advisory Services and other Stakeholders; (3) Strengthening the National Agricultural Advisory Services (NAADS); (4) Supporting Agribusiness Services and Market Linkages; and (5) Program Management and Coordination.
Learn More
The PISD project
The Ministry of Agriculture, Animal Industry, and Fisheries (MAAIF) and Japan International Cooperation Agency (JICA) agreed to execute a study for Irrigation Scheme Development referred to as The Project on Irrigation Scheme Development in Central and Eastern Uganda (PISD) through technical cooperation. The focus was on establishment of medium and large scale irrigation scheme in Uganda targeting farmers cultivating mainly rice in lowland areas with season flooding and unreliable agricultural water source(s). The Study has was entrusted by JICA to the JICA Study Team consists of a consultant from Japan in collaboration with counterpart staffs from MAAIF and MWE. A total of 10 candidate sites districts were studied for irrigation development potential in the districts of Butambala, Buikwe, Kween, Sironko, Bukedea, Bulambuli, Mbale, Butaleja, Budaka and Soroti..
Learn More
The RPLRP project
The Regional Pastoral Livelihoods Resilience Project (RPLRP) is a regional project financed by a USD 40 Million loan got by GOU from the World Bank and implemented by three IGAD member states: Uganda, Kenya and Ethiopia. The RPLRP was prepared within the framework of the IGAD Drought Disaster Resilience and Sustainability Initiative (IDDRSI) and aligned with the Regional Programming Paper (RPP) and Country Programming Paper (CPPs).
Learn More
The MOBIP project
Uganda Vision 20140 is a key strategy document for the government of Uganda (GOU) and aims to make Uganda a middle-income country by 2040. The National Development Plan II (NDP2) mentions the development of the livestock sector as one of these strategies, and in particular Uganda’s ability to produce some of the best beef in Africa.
Learn More
The Goat Export Project
Project Objectives “To enhance the contribution of the goat industry to farmers’ income and welfare.”             Specific objectives Avail improved indigenous and exotic (Savannah) goat germplasm to farmers in the project area which will serve as a springboard for establishing a pilot goat export zone in the country To establish open nucleus breeding herds coupled with systematic cross breeding programme for generating meat goat types for fattening and Improve the goat management systems and create sustainable supplies of quality goats for internal and export markets.
Learn More