To provide vital information about descriptions, traits and control of the Desert Locusts to increase resilience of local communities to invasions by the same.

The Food and Agriculture Organization of the United Nations (FAO): Web link here

What is a Desert Locust? 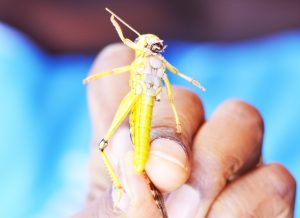 The desert locust (Schistocerca gregaria) locally known as emaathe, enzige, enzigye is a swarming short-horned grasshopper in the Acrididae family. As the world’s most dangerous migratory pest species, the desert locust reproduces rapidly, migrates over long distances and has the ability to change their behavior and appearance under particular environmental conditions.

The desert locust is herbivorous and can stay in one place for 17 hours and if strong enough can range 3,000 miles in their lifetime and an average of 50- 300km per day.

Locusts can multiply 10-20 times per generation and an adult female will lay up to 900 in 3 months. A swarm size of a square kilometer devours 100-160 tons of vegetation (crops and pasture) per day. Locust movement is determined by wind patterns and vegetation availability and primarily feeds on green vegetation.

What is the difference between locusts and grasshoppers?

Locusts are part of a large group of insects commonly called grasshoppers which have big hind legs for jumping. Locusts belong to the family called Acrididae. Locusts differ from grasshoppers in that they have the ability to change their behaviour and habits and can migrate over large distances.

What countries are affected by the Desert Locust?

During quiet periods (known as recessions) Desert Locusts are usually restricted to the semi-arid and arid deserts of Africa, the Near East and South-West Asia that receive less than 200 mm of rain annually. This is an area of about 16 million square kilometres, consisting of about 30 countries.

For how long does a Desert Locust live?

A Desert Locust lives a total of about three to five months although this is extremely variable and depends mostly on weather and ecological conditions. The life cycle comprises three stages: egg, hopper and adult. Eggs hatch in about two weeks (the range is 10-65 days), hoppers develop in five to six stages over a period of about 30-40 days, and adults mature in about three weeks to nine months but more frequently from two to four months.

How many eggs does a Desert Locust female produce?

Desert Locust females lay eggs in an egg pod primarily in sandy soils at a depth of 10-15 centimetres below the surface. A solitary female lays about 95-158 eggs whereas a gregarious female lays usually less than 80 eggs in an egg pod. Females can lay at least three times in their lifetime usually at intervals of about 6-11 days. Up to 1,000 egg pods have been found in one square metre.

How far and how fast can Desert Locusts migrate?

Desert Locusts usually fly with the wind at a speed of about 16-19 km/h depending on the wind. Swarms can travel about 5-130 km or more in a day. Locusts can stay in the air for long periods of time. For example, locusts regularly cross the Red Sea, a distance of 300 km. In the past there have been some spectacular and very long distance swarm migrations, for example from North-West Africa to the British Isles in 1954 and from West Africa to the Caribbean, a distance of 5,000 km in about ten days in 1988. Solitary Desert Locust adults usually fly at night whereas gregarious adults (swarms) fly during the day.

How big are swarms and how many locusts are there in a swarm?

The public can also call the Task Force Response Team Toll Free on 0800177777 to report the Desert Locust Invasion in your community.

This page was set up in fulfillment of knowledge sharing requirements of the National Task Force for the Control of the Desert Locust Invasion. The Inter-ministerial Task Force was set up with coordination from the Office of the Prime Minister and is led by the Ministry of Agriculture, Animal Industry and Fisheries with support from the Food and Agriculture Organisation of the United Nations, Uganda People's Defence Forces and Desert Locust Control Organization for Eastern Africa.