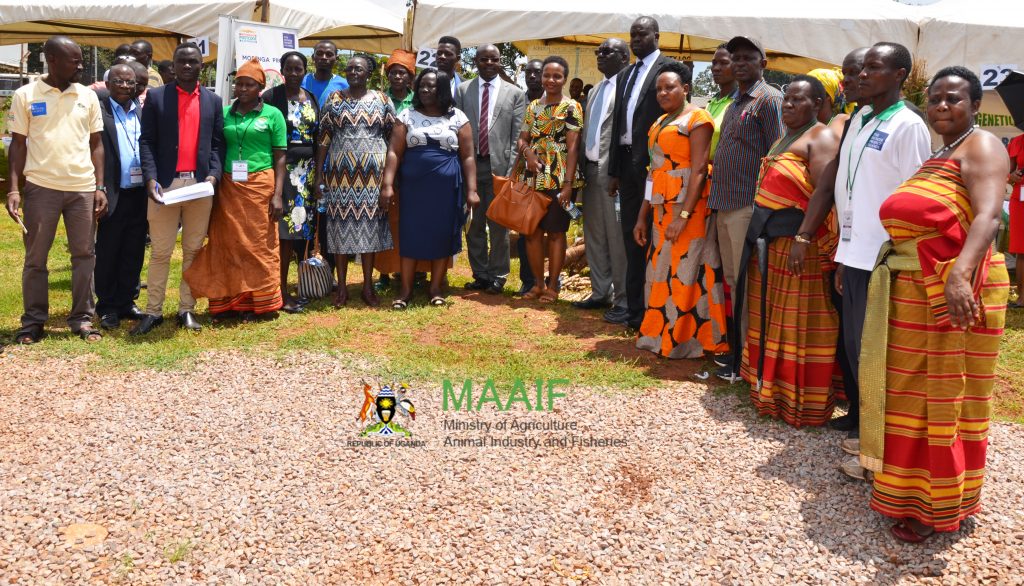 Kampala, 29th October 2019. On Friday the 25th of October 2019, the 9th edition of the Annual Indigenous and Traditional Food Fair was officially opened in Kampala by Mr. Pius Wakabi Kasajja the Permanent Secretary of the Ministry of Agriculture Animal Industry and Fisheries.

The Indigenous and Traditional Food Fair which is organised by partners led by Participatory Ecological Land Use Management (PELUM).

The major objective is to showcase the actual and potential contribution of farmer managed seed systems on conservation of agricultural biodiversity, food security and food sovereignty of smallholder farming communities and Uganda at large.

In addition to that, the Fair is used as a platform for creation of awareness on the value of indigenous/ traditional food systems, farmer managed seed systems and their contribution to agro-biodiversity preservation and food sovereignty as well as dialogue and experience sharing on the policy frameworks, benefits, current threats and challenges faced by FMSS and strategies to promote them.

The fair features a series of activities including exhibition of indigenous/traditional/cultural foods and seed, related indigenous knowledge, technologies and value addition by the different exhibitors as well as presentations and key note address on farmer-managed seed systems, and sharing of relevant information packages.

Globally, there is unprecedented increase in the use of agricultural inputs, and particularly inorganic fertilizers, pesticides and irrigation systems driven by the increasing population and the pressure to intensify

production. Such practices have resulted in negative impacts on soils and biodiversity thereby affecting crop and animal genetic diversity and welfare, human nutrition and increased costs for public health and communities’ vulnerability to external shocks.

These effects are being felt in contexts where natural resources are under increasing pressure as revealed by some studies that the earth is fast approaching boundary limits on various natural phenomena including climate change, ocean acidification and global freshwater use.

With these changes therefore, our genetic resources including indigenous/traditional seeds are at a threat.

Over the years Indigenous/ traditional seeds have been strongly linked to food sovereignty, food and nutrition security and agrobiodiversity which is key for resilience in the face of climate change.

Their contribution to the overall food and nutrition security in Uganda is of utmost significance given the fact that majority of Ugandans who reside in rural communities are involved in subsistence production and derive their livelihoods from agriculture.

It is important to note that though Agriculture is the mainstay of the Ugandan economy, contributing

Malnutrition has adversely affected the quality of life of children and mothers, despite the variety and quantity of foods that Uganda can produce. 53% of children under five years are malnourished and hence anaemic, and 29% of them are stunted or wasted.

Indigenous and traditional food systems are inextricably linked to food sovereignty and agrobiodiversity. For millennia, Indigenous and traditional food systems have provided rural communities with diverse, healthier, fresher, and more nutritious foods where rural communities have the autonomy/sovereignty to grow their own crops that are nutritionally and culturally appropriate to their population, while preserving and maintaining agriculture biodiversity as they are the main source of diverse germplasm which broaden the genetic base of production with multiple crop species and varieties adapted to specific production systems and microclimates.

Food sovereignty is defined by researchers as the right of people to define their own food and agriculture, to protect and regulate domestic agricultural production and trade in order to achieve sustainable development objectives.

In addition, food sovereignty ensures that the rights to use and manage lands, territories, waters, seeds, livestock and biodiversity.

It recognizes Indigenous Peoples as nurturers of food systems that have been sustainable for thousands of years. Agricultural biodiversity is among the earth’s most important resources.

It is a broad term that includes all components of biological diversity of relevance to food and agriculture, and all components of biological diversity that constitute agricultural ecosystems: the variety and variability of animals, plants, and micro-organisms, at the genetic, species, and ecosystem levels, which are necessary to sustain key functions of the agro-ecosystem, its structure and processes. It’s the first link in the food chain, developed and safeguarded by indigenous peoples, women and men farmers, forest dwellers, livestock keepers and fisher folk throughout the world and has developed as result of the free-flow of genetic resources between food producers.

Continued access and control of reliable sources of diverse seeds is key for food sovereignty, providing healthy diets and conserving agricultural biodiversity. Farmers are the major custodians of seeds and have nurtured it for generations through what is generally referred to as Farmer Managed Seed Systems (FMSS) or otherwise termed as “informal” seed systems. These systems are the major sources of seeds for farming households and in Uganda they account for over 80% of the total seed supply.

About PELUM Uganda
Since 1995, Participatory Ecological Land Use Management (PELUM) Uganda has been working to improve the livelihoods of small-scale farmers and the sustainability of rural communities, through the fostering of ecological land use management.

PELUM shares skills and knowledge about good practices and techniques, through a broad network of like-minded organizations, undertake research and demonstration projects and advocate for policies that better support small-scale farmers. PELUM Uganda is part of a 12-country-strong Association of civil society organizations in eastern, central and southern Africa. In Uganda, PELUM currently has a membership of 54 NGOs in agriculture that have a presence in 102 districts and reach over 3 million smallholder farmers.