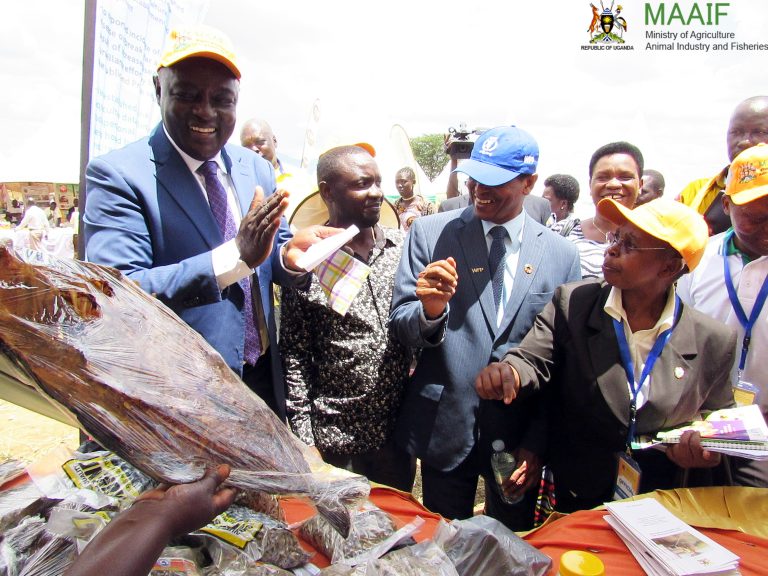 On the 16th of October 2018, the Nabuin Zonal Agricultural Research and Development Institute which is an institute of the National Agriculture Research Organisation (NARO) located in Nabilatuk district hosted the national activities of the 39th National World Food Day celebrations.

The activities were organised by the Agriculture Ministry through the Extension Directorate and NARO in partnership with the Food and Agriculture Organisation of the United Nations and World Food Programme.

Above: Hon. Vincent Bamulangaki Sempijja the Minister for Agriculture, Animal Industry and Fisheries (Extreme Left) touring the stall of the Directorate of Fisheries Resources at the World Food Day exhibition.

As stated by the Honorable Minister for Agriculture, Animal Industry and Fisheries during the celebrations, the Ministry continues to pursue pursue policies and interventions that promote increased value addition and exports.

This will be made possible by promoting elite varieties resistant to wilt and distribution of 100 million coffee seedlings per annum, expanding area under coffee production by 5% in traditional areas and 25% in new areas and enhancing extension services.

The tea industry has made tremendous progress in the last 10 years with production at 61,376 MT, of which 60,504 MT were exported generating US$ 84.7m. The Ministry’s target is to produce 135,308 MT by 2020, valued at about USD190m with Government supporting the production and distribution of 34,965,000 quality tea plantlets per annum through the Operation Wealth Creation programme.

Government has made big strides in the development of the Vegetable oil industry with a total of over 10,000 hectares of palm trees having been established, 33 traditional oil mills developed and about 80,000 households benefiting from this intervention through increased incomes and employment opportunities in Kalangala and Buvuma as well as districts in Eastern and Northern Uganda.

In beef, our target is 360,000MT by 2020. This FY 2016/17, Uganda under the Egypt- Uganda Food Security project is working to export beef from 1200 cattle per month. This will be achieved through increased support for animal breeding infrastructure, provision of water and meat export support services.

Commitments towards eradication of hunger

The drop in worldwide levels of hunger to 21.8% (2017) from 27% in 2015, there is progress in the fight against extreme hunger with reductions in prevalence of under nutrition, child stunting, child wasting and child mortality.

The Food security analysis for Uganda also indicates that generally, 83.6% of the total population were classified in phase one as being food secure (Minimal Food Insecure).

With the 2017 Global Hunger Index showing positive developments such as these, Government is committed to implementation of more interventions to step up hunger eradication in Uganda.

In a speech from His Excellency President Yoweri Kaguta Museveni that was presented by the Agriculture Minister, Government plans to roll out the following.

Under Research through the National Agricultural Research Organisation (NARO), Government is at the forefront of bio-fortification aimed at enhancing nutrient quality of staple foods by processing of protein-rich maize, iron-rich beans, zinc-rich bananas, Vitamin A orange-fleshed sweet potatoes among others.

These high-yielding crop varieties are being promoted in many communities.

Government has invested in research for development of high-yielding, pest and disease-resistant seed, planting materials and animal breeds to increase productivity.

Increasing availability and access to water for agricultural production

To increase resilience to climate change and promote increased availability and access to water for agricultural production Government is promoting development of irrigation and labour-saving technologies especially for smallholder farmers.

Government has also committed Shs 25 billion for relief food and is procuring 1,600 metric tons of maize flour and 1,400 metric tons of beans for 1.3 million refugees in various parts of the country.

Funding worth UGX 14 billion has been allocated for more interventions for Karamoja with support from World Bank through NUFAS 3 under the Disaster Risk Financing programs that transfer cash or food to households that participate in the public-works interventions.

Promotion of industrialisation in agriculture

Agriculture industrialization driven by Public- Private Sector Partnership or joint ventures under ASSP and NDP11 2015/16 -2019/20 is addressing growth of the sector and socio-economic transformation of the country.These include the following.

The Vegetable Oil Palm Development project which processes bio-fortified cooking oil and it has expanded to the Islands of Buvuma and Northern Uganda.

The Soroti fruit factory is yet to open to produce fruit pulp from the oranges, mangoes and packed juice for both the local market and export.

Coffee, milk and beef processing for exports, revival of fish processing facilities all contributing to putting a diverse range of food products on the market and changing consumer patterns and demand for safe foods.

The National Resistance Movement Government has continued to prioritize agriculture as stipulated in the Prosperity for All (PFA), Vision 2020,Vision 2040 and the National Development Plan (NDP2).

History of the World Food Day

The UN Governing Council November 1979 declared 16th October of every year to be the day to celebrate World Food Day. It is also the same day that the Food and Agriculture Organization of the United Nation (FAO) was founded In Quebec, Canada in 1945. All governments, national and international organizations in the world take time to reflect on the status of food security, hunger, malnutrition, poverty and agricultural development issues.

The Objectives World Food Day are to:

About the National Agricultural Research Organisation

About the Nabuin Zonal Agricultural Research and Development Institute

Nabuin Zonal Agricultural Research and Development Institute is one of the sixteen Public Agricultural Research Institutes under the National Agricultural Research Organization established by the NAR ACT (2005). The institute is mandated to conduct and manage applied and adaptive agricultural research and facilitate the development and dissemination of appropriate agricultural technologies that address the specific needs of the North Eastern dry land Agro-ecological zone of Teso and Karamoja. The zone comprises of 15 districts of Serere, Soroti, Kaberamaido, Ngora, Kumi, Bukedea,Amuria, Katakwi, Napak, Moroto, Nakapiripirit, Kotido, Abim, Kaabong, andAmudat. Nabuin ZARDI is located in Nakapiripirit district.

About the Food and Agriculture Organisation of the United Nations

The Food and Agriculture Organization of the United Nations (FAO) is s specialized agency of the United Nations with over 194 member states and working in over 130 countries worldwide, that leads international efforts to eradicate hunger. The FAO’s goal is to achieve food security for all and make sure that people have regular access to enough high-quality food to lead active, healthy lives.