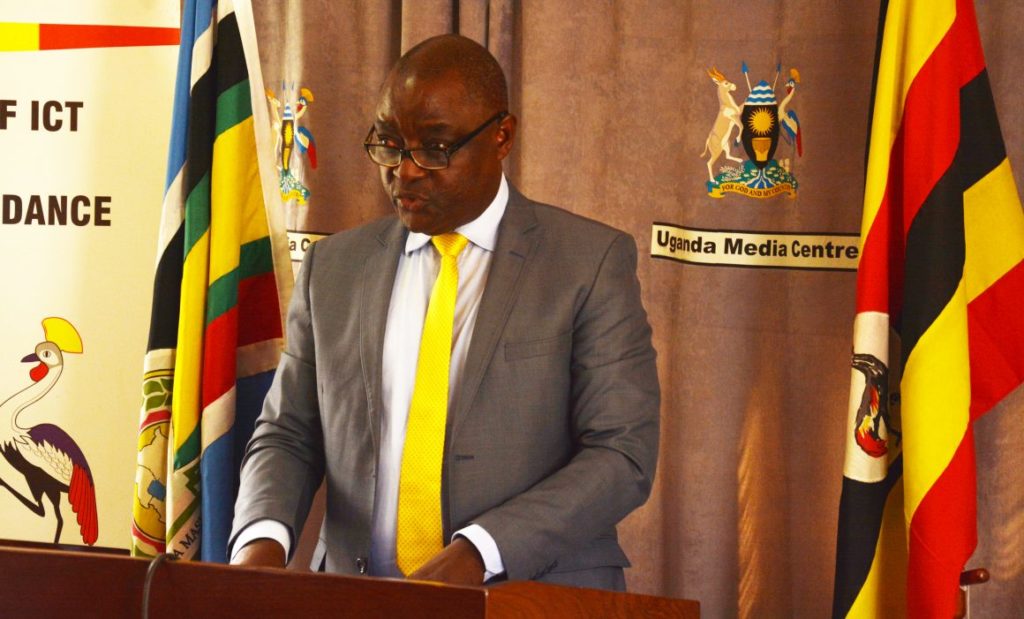 On the 25th of October 2018, Hon. Vincent Bamulangaki Sempijja the Minister for Agriculture, Animal Industry and Fisheries presented an official Press Statement to the Media at the Uganda Media Centre in Kampala.

Above: Hon. Vincent Sempijja the Minister for Agriculture, Animal Industry and Fisheries addressing the media at the Uganda Media Centre. The Statement was centered on the planned launch of a National Action Plan and Countrywide Awareness Campaign for Mycotoxin Mitigation with special emphasis on Aflatoxins in Uganda.

An excerpt of the Statement is as follows.

By definition, mycotoxins are natural compounds produced by fungi.

One group of these mycotoxins which has heavier impact in agriculture is “aflatoxins” which are natural compounds produced by a mould known as Aspergillus flavus which grows on grains that have been poorly handled by farmers, traders and in some cases consumers.

The mould may sometimes not be visible on the affected grains. This means that the grains can develop moulds at the level of harvest, storage, transportation or processing, especially in conditions of both high temperatures and high relative humidity. Relative humidity indicates the amount of moisture in the atmosphere and it is considered high if it is above 65%. The combination of high humidity and high temperature makes it convenient for the moulds which produce aflatoxins to grow.In the case of Uganda, the products that are most affected include groundnuts, all oils seeds cakes such as those from cotton seeds, cereal crops which include millet, sorghum, rice and maize, dried cassava chips, sweet potato chips and silver fish which is commonly referred to as “mukene”. Animal feeds made from these products are also affected.

While the moulds may not be easily seen by the naked eye in their early stages of development, they become more visible in extreme contamination where a gray-green or yellow-green colour starts to appear on the grains.

The prevalence of aflatoxins, as will be broken down at the official launch on the 31st, has an impact on human and animal health and trade in agricultural products and as a result, national development. The impact is felt in all these areas mainly due to the high dependence on the affected crops by both human beings and animals for food and feeds respectively.

Majority of these crops are also staple foods that are grown traditionally by some communities. Consumption of food and beverages that are contaminated with aflatoxins increases the risk of getting liver cancer for humans, reduces immunity and causes digestive disorders, low birth weight and impaired child growth.

Contamination with Aflatoxins also greatly reduces the quality of agricultural products, which also end up either attracting low prices or being rejected in the local and international markets. Since grains like Maize are also used to make animal and fish feeds, fish and livestock are also affected.

For instance, animals that consume feeds which are contaminated with aflatoxins produce low-quality meat and milk.

To date, a number of steps have been taken to make Uganda more resilient to aflatoxins and increase awareness about control of aflatoxins. Over time, Uganda has received technical support from regional and global partners in this endeavour of controlling aflatoxins.

In the year 2014, Uganda was selected as one of the first five pilot countries of the Partnership for Aflatoxin Control in Africa under the arrangement of the African Union Commission.

The list of pilot countries has since grown to six and includes Uganda, Malawi, Nigeria, Tanzania, The Gambia and Senegal as countries where technical support is being stepped up by the African Union. With this inclusion, the Ministry of Agriculture, Animal Industry and Fisheries set up a focal desk in the Directorate of Crop Resources under the division of Food and Nutrition Security that has since engaged in joint planning activities with the Uganda Mycotoxins Mitigation Steering Committee. The term “Mycotoxins” refers to the group of toxins produced by fungi or moulds which include aflatoxins.

In October 2016, Uganda was again selected as host of the 2nd Partnership Platform Meeting of the African Union Partnership for Aflatoxin Control in Africa. This meeting convened representatives of member states of the African Union and was opened by His Excellency the President in Entebbe on the 13th of October 2016. At this meeting, I presented our Country’s commitment to supporting the fight against aflatoxins through enhancing research, supporting promotion of appropriate technologies and sensitisation through strategic communication and extension services.

The Ministry has since provided technical and financial support to the Mycotoxins Mitigation Steering Committee and also integrated aflatoxin prevention and control initiatives in key projects which include the Agriculture Cluster Development Projectfor development of coffee, rice, maize, cassava and bean value chains targeted towards national food security improvement and regional trade and the Uganda Multi-Sectoral Food Security and Nutrition Project.

In addition to that, the Ministry rolled out guidelines aimed at advising farmers across the country to adopt best practices of handling grains. These were developed by the Directorate of Crop Resources and the Directorate of Agricultural Extension Services. These guidelines caution farmers and agribusiness dealers against drying grain on bare ground, premature and late harvesting of crops especially Maize, exposure of grains to moisture during storage and use of dirty containers and vehicles for transporting food and agricultural products.

The guidelines recommend that farmers and agribusiness dealers dry grains on materials like Tarpaulins, always make sure that the grain is adequately dried before storage, store grains in Air-tight Hermetic bags and Metallic or Plastic Silos and always use clean containers for transportation and storage of grains.

The development of moulds can be avoided by storage of grain in an environment where the temperature is below 65 degrees Fare height, and the moisture below 12–13% especially for maize).

Furthermore, the Ministry has developed the following nutrition-specific guidelines, policies and strategies in line with the Agriculture Sector Strategic Plan and National Development Plan which contain specific actions towards aflatoxin prevention and control; the “Guidelines for Integration of Nutrition in Agricultural Enterprise Mixes” “Food and Nutrition Handbook for Extension Officers” and “Facilitators Guide for the Guidelines to Integrate Nutrition in Agricultural Enterprise Mixes.”

More effort is being invested in improving agricultural extension services to increase mobility of extension workers through the procurement and distribution of more vehicles and motorcycles by December this year. This should also improve engagement with the farmers for training and sensitisation in areas including aflatoxin control.

The Ministry also set up a National Agriculture Portal, agriculture.go.ug, which is the official website of the Ministry of Agriculture, Animal Industry and Fisheries with a page and library specifically for information about the control of mycotoxins in Uganda. In adding to these steps, we shall be having the official launch of a national aflatoxin action plan and Information, Education and Communication (IEC) materials on the 31st of October 2018 by His Excellency the President.

After that we will be kicking off countrywide sensitisation through the media, extension services and official platforms of the Ministry.

The launch of the Action Plan Against Aflatoxin prevalence was organised by the Ministry of Agriculture, Animal Industry and Fisheries in partnership with the USAID Feed the Future Uganda Enabling Environment for Agriculture Activity, and the Partnership for Aflatoxin Control in Africa.

The Ministry will proceed to present a Cabinet Paper for Cabinet to take a position of aflatoxin control and the campaign will then be taken to all the four regions of the country.

Hon. Sempijja thanked all stakeholders involved in one way or another in the fight against the aflatoxin menace and particularly called upon the media to step up its activities geared toward sensitisation of the public on issues related to agriculture.

The Minister also called upon all Ugandans to join in the fight against aflatoxins to avoid the impact that they have on the agriculture, health and the economy of this country.