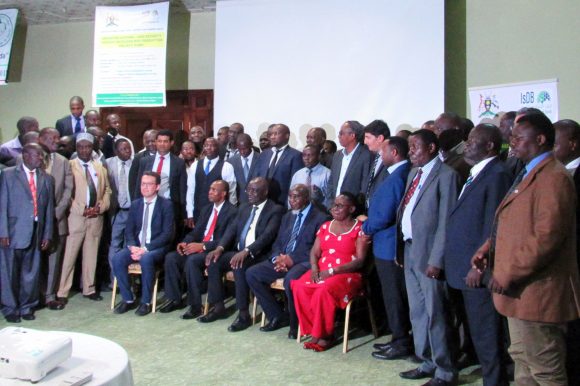 The project which was officially launched by Hon. Vincent Bamulangaki Sempijja the Minister for Agriculture, Animal Industry and Fisheries was designed by the Ministry to support production of rice in the districts of Bugiri and Bugweri.According to the Minister, this project is considered as a channel for increasing production and productivity, increasing household incomes, increasing exports, value addition and availability of water for agricultural production.The following is an excerpt of the message delivered by Hon. Vincent Sempijja at the launch.

“As one of the fastest growing economies in Africa, Uganda under the leadership of the NRM Government is progressing towards middle income status and is on track to attain the ‘Sustainable Development Goal’ of ending hunger and all forms of malnutrition by the year 2030.One major challenge however is that about 68% of our people in Uganda are still engaged in subsistence agriculture and therefore do not produce for the market and cannot earn from agriculture.To address this, the Ministry of Agriculture, Animal Industry and Fisheries is working within the guidance of a mission “to transform this population into commercial agriculture” which will drive more of our farmers into the money economy.This drive for commercial agriculture is also informed by the National Development Plan (NDP II), National Agricultural Policy (NAP) and the Agriculture Sector Strategic Plan (ASSP) through which Government is driving this much-needed transformation.

The launch of this project is timely because it focuses on one of the crops that Government prioritized in the Sector Strategic Plan. While there has been a major challenge of lack of adequate market for food that is grown, there is evident high demand for in Uganda, in the region and on the international market today.The increasing population, especially in the urban areas has also greatly increased the demand for rice in these areas including Kampala.From agronomy, we know that rice has long shelf-life of 3 to 6 months under low use of technologies and can go up to 2 years when the use of technologies is high.Superior rice varieties such as NERICA 4 are also known to meet farmers’ needs since they are drought-tolerant and disease-resistant.

Today, local rice production in Uganda is estimated at 238,000 MT with the total consumption estimated at 346,309 MT. The gap in rice production has been filled through importation of rice over the years and this has increased imports to a level where they are much higher than the exports.The quantity of rice that was imported in 2017 was estimated at 198,620 MT while the exports were estimated at 90,310 MT creating a net-import difference of about 108,310 MT of un-milled rice.With that in mind, we should focus be producing enough rice for both our local consumption here in Uganda and for export to large markets in in the region and elsewhere in the world.But knowing that climate change affects agricultural production, Government through the Ministry of Agriculture, Animal Industry and Fisheries is focused on increasing availability and access to water for agricultural production all year round.

That is how the ‘Enhancing National Food security through Increased Rice Production project’ was birthed with support from our development partners the Islamic Development Bank and  the two private sector partners Pearl Rice Company and Busowa Traders and Farmers Cooperative Society Limited. The project plans to irrigate 5,500 hectares of farm land for rice in the Kitumbezi, Igogero, Naigombwa swamps. This is expected to produce close to 32,000 MT of rice annually at expected yield of 3 MT/ha productivity. This will help to reduce the current rice imports. ”The project launch was attended by the Project Steering Committee of the Enhancing National Food Security through Increased Rice Production Project, Representatives of other Ministries, Departments and Agencies of Government, officials from the Islamic University in Uganda, Council members of the Islamic University in Uganda (IUIU), Leaders from the District Local Governments of Bugiri and Bugweri, the Islamic Development Bank, the Ministry of Finance, Planning and Economic Development, the Parliamentary Committee for Agriculture, Animal Industry and Fisheries, the Parliamentary Committee for National Economy, the Project Steering Committee members and the District Local Governments.Notes for editors Below are additional details for editors.About the Ministry of Agriculture, Animal Industry and Fisheries (MAAIF) The Ministry of Agriculture, Animal Industry and Fisheries is a Ministry in the Government of Uganda charged with creating an enabling environment in the Agricultural Sector.The Ministry formulates, reviews and implement national policies, plans, strategies, regulations and standards and enforce laws, regulations and standards along the value chain of crops, livestock and fisheries.