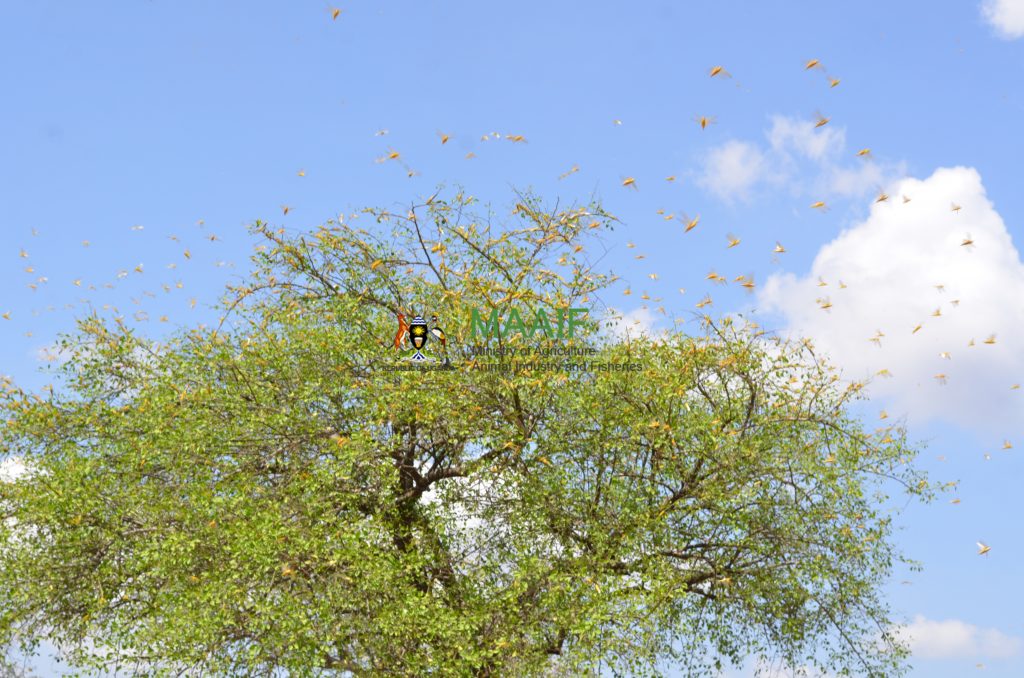 Kampala, 7th April 2020. Uganda has received new swarms of Desert Locusts from the East, as recorded by Surveillance and Geo-Information Teams in the North Eastern region of the country.

Below is an excerpt of the official statement presented by Hon. Vincent Bamulangaki Ssempijja the Minister of Agriculture, Animal Industry and Fisheries at the Media Centre on this issue.

On behalf of the Ministry of Agriculture, Animal Industry and Fisheries, I take this opportunity to inform you that the country has been invaded by a second wave of desert locust swarms from Kenya. The desert locusts entered Uganda through Amudat district on Friday 3rd April 2020. The two swarms that entered have further spread inland into Kumi, Katakwi, Otuke and Agago districts by yesterday 6th April 2020.

This Media briefing provides an update on the current status of the desert locusts in the Country following the second wave of invasion and provide the interventions undertaken by the Ministry and partners to contain the locust invasion.

Uganda has been invaded by a second wave of desert locust from Kenya. The desert locust entered through Amudat district on Friday 3rd April 2020. The two swarms that entered have further spread inland into Kumi. Each of these is estimated between 5 – 10 square kilometres. Following control by UPDF in Namalu Nakapirrpiti district, part of the swarm moved and settled in Kumi district in the parishes of Osera, and Akumu of Ongino sub county and Agule of Kumi Sub county and Agago as of yesterday 6th April 2020. UPDF was notified and control efforts undertaken

Another swarm spread from Amudat through Nabilatuk and settled in Ogongoja sub county in Katakwi district and the UPDF team at Olilim intercepted it and control efforts are ongoing. A splinter swarm further through Amuria, Abim and settled in Otuke district.

Uganda has previously recorded nine (9) huge swarms of desert locusts in the Northern and Eastern parts of the Country. These swarms were classified as mature locusts and did not cause significant damage to the vegetation cover. However, the eggs that were laid are expected to hatch into nymphs and young locusts that have high affinity for food. This may pose an eminent danger to food security and livelihoods.

Technical Surveillance Teams in the region have continued to respond to reports of desert locust egg-hatching in the Districts of Agago, Ngora, Sironko and Bukwo. However, site visits by Technical Surveillance Teams confirmed presence of Variegated Grass hoppers but not locusts. Other reports of egg-hatching in the Districts of Amudat and Nakapiripirit have also been proved false by the Surveillance Team. No hatching of desert locust eggs has yet been observed anywhere in the Country as of 17th March 2020.

The DLCOEA aircraft has continued to spray hoppers and fledgling locusts in the areas of Lodwar – Turkana Kenya as part of the transboundary strategy to control locusts within the East African region.

Government through the Ministry of Agriculture Animal Industry and Fisheries has undertaken various interventions to control the desert locusts’ invasion:

Chemicals: Government has fast tracked the procurement of appropriate chemicals for spraying the locusts. A total of 1,400 litres of Fenitrothion 96% ULV out of the 10, 000 litres that were ordered has so far been received from Twiga Kenya Limited. The 10,000 Ltrs of Fenitrothion 96% ULV has not been received due to limited Aircrafts flying out of Japan due to the COVID – 19 Challenge. The Supplier is also trying various methods of shipping the chemical to Nairobi. The absence of this chemical hinders the use of Aircrafts which are much more efficient than the ground operations.

Equipment: Government has so far procured and dispatched 500 Motorised Spray Pumps, 2,000 Knapsack Spray Pumps and 2,000 sets of Personal protective gear. Motor Vehicle Mounted Spray Pumps have also been deployed. The troops are already deployed and are busy spraying the Locusts from 04th April 2020.

Funds: Government has so far mobilised UGX 22.0 Billion from its treasury and various development partners to facilitate the implementation of the Desert Locust Control Plan. The additional UGX 16.18 Billion approved by Cabinet has not yet been received from treasury.

Capacity Building: The Ministry of Agriculture in collaboration with experts from DLCOEA, FAO and NARO have built capacity of the UPDF, Extension Workers, Uganda Wild Life Authority staff and District Local Government staff. To-date 2,045 UPDF soldiers, 85 UWA staff, 385 Extension Workers and 450 other District Local Government staff have been trained and deployed. During this lockdown; we are depending on this built capacity to execute the first response to the desert locust invasions

The control activities by the UPDF have not allowed the Desert Locusts to settle and cause any significant damage to the vegetation. This has made it extremely hard for them to lay eggs as the spraying destabilizes them and they instead move in smaller swarms.

WFP: The United Nations World Food Programme (UN – WFP) also donated 5 (five) fully Serviced Trucks which are being used for logistics in the control operations. WFP has also provided a number of mobile stores for the storage of equipment in the field.

BULGARIA: The Government of Bulgaria offered to H.E. The President an Aircraft to facilitate aerial spraying. The Government OF Uganda shall be responsible for providing chemicals, fuel and accommodation for the crew. The Aircraft is currently being configured to locust spraying before it is brought into the Country.

CHINA: The Chinese Government has donated 50,000 Litres of Malathion ULV; Five Hundred Pieces (500 pcs) of Hand-held ULV Sprayers; Five hundred pieces (500 pcs) of Knapsack Motorised Sprayers, Forty Pieces (40 pcs) of Unmanned Air Vehicles, and two thousand sets (2000) of Protective Gear. These items are yet to be delivered in the country. The Ministry will be responsible for clearing the items and any associated local costs.

The Nose Masks (N95) are hard to find as there is a stiff competition for them since they are also being used to protect communities from Coronavirus.

Due to COVID-19 control measures in place in the country right now, there are skeletal staff supporting the field control activities

The 8,600 litres of the fenitrothion 96 ULV is still not delivered due to COVID-19 challenges both at the manufacturing facility in Japan and formulation facility in Nairobi. The DLCOEA aircraft had been redeployed to Lodwar in Turkana for transboundary control and the clearance processes with Civil Aviation Authority (CAA) has been initiated for it to return with the crew.

We are reliably informed that some of the areas in Kenya previously habited by desert locusts have newly hatched hoppers which may be headed to Uganda. There is an urgent need to engage the Government of Kenya on the possibility of joint operations for ground spraying to ensure that the newly hatched hoppers do not reach maturity and swarm into Uganda.

Farming Communities in the affected communities are however encouraged to take advantage of the recent rains and plant crops to avert a possible food crisis.

FOR GOD AND MY COUNTRY