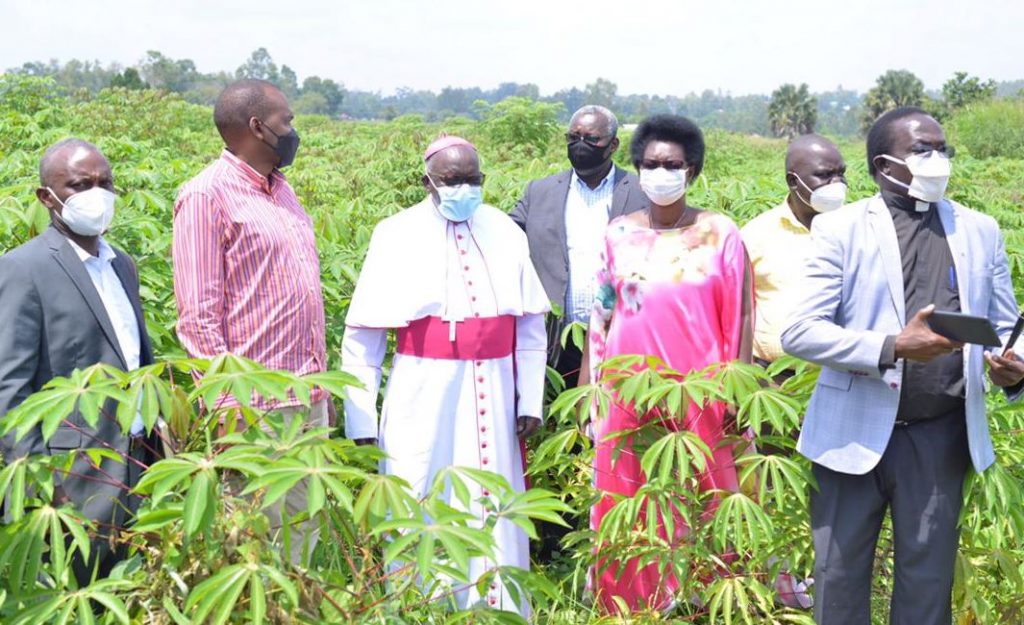 The Archbishop of Gulu, John Baptist Odama, has called on the church and the state to work together to attain development.

The catholic prelate made the remarks on Thursday when the minister of Agriculture, Animal Industries and Fisheries Hon Frank Tumwebaze visited the Gulu archdiocese to see firsthand the commercialization and industrialization of cassava spearheaded by the catholic church.

“When the church and the state work together for holistic development of their people there is peace across the world,” Archbishop Odama said. Though strides have been made in the fight against poverty, Archbishop Odama cited a recent UBOS report that put poverty rates in the Acholi sub-region at 68 per cent. “It appears there is still a long way to go,” Archbishop Odama who has spearheaded the growing of cassava in Acholi told the minister.  “When you wake up, we want you to think of Northern Uganda.  We want you to think of northern Uganda in everything you do.”

He added, “That’s why we decided to put aside all the negative partisan issues and we adopted the motto of farming without borders.”  The project which was started in 2018 has now about 33 cooperatives and 10, 000 farmers who grow cassava which, among other things, is now being turned into ethanol by Bukona Agro Processors limited in the Nwoya district.

In his speech, Hon Tumwebaze said that though he isn’t a catholic he has a strong belief and trust in the integrity of the Catholic Church in as far as implementing and maintaining projects is concerned. ‘I have my own experience in my constituency,” Hon Tumwebaze who is also the Member of Parliament (MP) for Kibale East said, “The catholic church never does white elephants. Their projects are executed and maintained. I have had a good working relationship with them.”   The minister who was accompanied on the tour by Hon Hellen Adoa, the minister of state for fisheries and Technocrats from the Ministry, said this visit has given their idea of profiling framers a major push.

“Under farmer profiling, we want to find out which crops are mainly grown in these sub-regions.  We were in Teso and though we can’t say we know everything at least we have an idea now. We discovered that they, too, have big cassava farmers.  Once the lockdown is lifted, we will be coming back for the sub-regional farming dialogues where we hope to ascertain among other things the sub-regional farming profiles”

The minister assured the archbishop that government will soon come through with President Museveni’s pledge of giving the project 5 tractors.  Dr Samuel Mugasi, the Executive Director of National Agricultural Advisory Services (NAADS), in his report, said how they have so far injected Shs 8 billion into the project.   “We have been supporting this cassava project since 2018 and now want to see that a factory is set up,” Dr Mugasi said, “We are still here and this year we have set aside some more money for this project.”

Dr. Ambrose Agona, the Director General NARO also advised the meeting that for the poultry farmers, there was a vaccine for the Newcastle disease available for them to use at the Uganda Industrial Research Institute and that the new Viking jersey breed that was introduced on the Ugandan market by NARO would work very well in the Acholi region as they have a high feed conversion rate and are adaptable to the high temperature zones while maintaining high quality beef and dairy output

Earlier, the Archbishop together with Hon Tumwebaze and his entourage had visited the 870-acre Cassava demonstration farm of Gulu Archdiocese found in Nigri village, Gulu. It was from this demonstration farm, which is physically supervised by Archbishop Odama, that the idea of making cassava growing the main crop in Acholi emanated from.