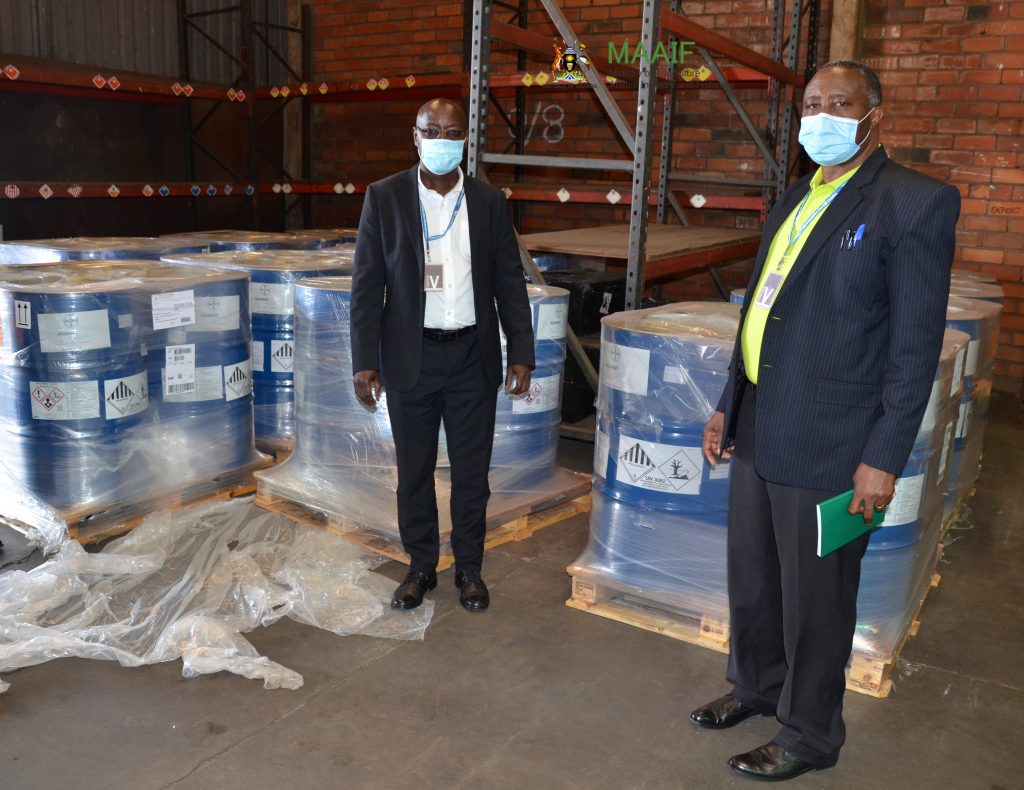 The pesticide which was received at the Entebbe International Airport is Deltamethrin 12.5 Ultra Low Volume which will reinforce aerial and terrestrial spraying. An official handover and dispatch of these consignments for control of Desert Locusts will take place later this month.

In a bid to support Kenya and Uganda in the control of Desert Locust Invasions, Bayer International is providing a total of 170,000 liters of Deltamethrin Ultra Low Volume Pesticide to the two countries.

Delivery of the Consignment and Unique Qualities of the Pesticide

From the onset of the waves of Desert Locust Invasions, the Task Force which is coordinated by the Office of the Prime Minister and led by the Ministry of Agriculture, Animal Industry and Fisheries instituted a Surveillance team.

The Surveillance Team is made up of Crop Protection Experts from the Ministry, Officers from the Uganda People”s Defence Forces (UPDF), Entomologists from the National Agricultural Research Organisation, Researchers from the FAO and Sector Officials from Districts including Extension Officers.

The team develops these maps with support from Geo-Information System Specialists from the Ministry of Agriculture, Animal Industry and Fisheries to highlight invasions and their spread.

As the Commissioner for Crop Protection explains in the clip below the maps, Uganda has received 4 major invasions since January 2020.

As described by Cornel Research, Deltamethrin is a pyrethroid insecticide that kills insects, including Desert Locusts, on contact and through digestion. It is used to control apple and pear suckers, plum fruit moth, caterpillars on brassicas, pea moth, aphids (apples, plums, hops), winter moth (apples and plums), codling and tortrix moths (apples).

It is also effective in the control of aphids, mealy bugs, scale insects, and whitefly on glasshouse cucumbers, tomatoes, peppers, potted plants, and ornamentals.

It also controls numerous insect pests of field crops. Formulations include emulsifiable concentrates, wettable powders, ULV and flowable formulations and granules. There are no known incompatibilities with other common insecticides and fungicides.

Deltamethrin is a synthetic insecticide based structurally on natural pyrethrins, which rapidly paralyze the insect nervous system giving a quick knockdown effect. Deltamethrin has a rapidly disabling effect on feeding insects and for this reason there is hope that it may be useful to control the vectors of “non-persistent” viruses (viruses that can be passed on by the vector within a few minutes of starting to feed on the plant). Deltamethrin’s mode of action is thought to be mainly central in action, or at least originate in higher nerve centers of the brain. Death of insects seems to be due to irreversible damage to the nervous system occurring when poisoning lasts more than a few hours. Deltamethrin poisoning occurs through cuticular penetration or oral uptake. The susceptibility of insects is dependent on a variety of factors and can vary, as with many insecticides, according to the environmental conditions. Flies are most susceptible to pyrethroid poisoning shortly before dawn.

The LD50 drops by the factor of 2 as compared to full daylight activity.

Many pyrethroids are not very active against cattle ticks, but some alpha cyano compounds (of which deltamethrin is one) have higher activity than organophosphates or amidines, the former standard compounds for this purpose. Deltamethrin has very good residual activity for outdoor uses (field crops, cattle dip, tsetse) and for indoor uses (mosquitoes, stable flies, horsefiles, fleas, cockroaches, stored product insects). Deltamethrin has very broad spectrum control. It is considered the most powerful of the synthetic pyrethroids. It is up to three orders more active than some pyrethroids

About Desert Locust Control in Uganda